The Transnational Working Group for the Study of Gender and Sport seeks to advance research on gender in sport, especially from a transnational and transdisciplinary perspective. Since 2005, regular meetings have stimulated fruitful scientific exchange, discussion and the mentoring of young scholars. The board of the working group is currently headed by Susan Bandy (USA), Nadia Carlomagno and Gigiola Gori (both Italy), Annette Hofmann (Germany), Manami Inoue (Japan), Leena Laine (Finland), Gerd von der Lippe (Norway), Martha Saavedra (USA) and Katalin Szikora (Hungary). 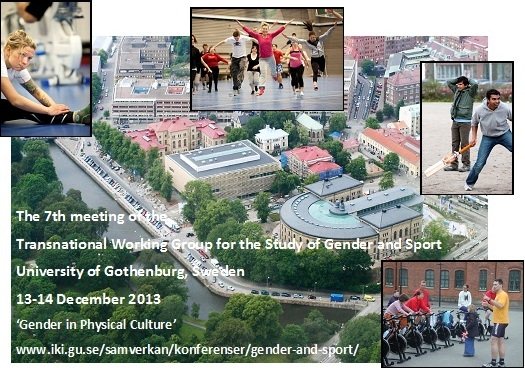 THE 2013 MEETING – Gender in Physical Culture

This year’s meeting will be held at the Department of Food and Nutrition, and Sport Science (IKI), Faculty of Education, University of Gothenburg, Sweden. The meeting’s theme is Gender in Physical Culture. This theme carries both local historical and contemporary meanings. Historically, physical culture was a concept associated with practitioners of Danish-Swedish and other systems of gymnastics in the 19th and early 20th centuries. It was a concept that was used to describe a way of life associated with the various forms of exercise and other physical activities of the day. Physical culture was thus more than mere movement; it was a lifestyle that was embedded in beliefs, knowledge and broader individual and social practices of the time (Kirk, 1999, 65). With the demise of Danish-Swedish systems of gymnastics, the term physical culture disappeared from the lexicon of the English speaking world. Recently, however, various scholars have argued for the recovery of the concept. As were the systems of exercise mentioned above, contemporary forms of human movement (i.e. sport, exercise, physical activity, APA etc.) are socially embedded. The concept is thus seen useful in providing ways to relationally theorise a wide range of socio-cultural issues, including the reflexive nature of how individuals’ bodies are being maintained, represented and regulated and how physical culture constructs and reinforces dominant values and norms.

Important dates for submission and registration: