Bieke Gils, a graduate student at the University of British Columbia, Canada, is the 2011 winner of the ISHPES Young Scholar Award.

Bieke Gils’ ‘heimat’ is Belgium and more specifically a small village in Flanders. She completed her undergraduate degree in Kinesiology at the Katholieke Universiteit Leuven (Catholic University Leuven) with Dr. Roland Renson and Dr. Pascal Delheye. In 2007 she set sail for Canada and finished her Master’s Degree in Kinesiology in 2009 at the University of Windsor, Ontario. Her interest in sport history and women’s sport history in particular led her to pursue a doctoral degree at the University of British Columbia, Canada with Dr. Patricia Vertinsky.

Bieke is currently in her second year of her PhD and recently received the Fred Hume Graduate Scholarship for excellence in sport history. In her current project Bieke Gils examines “women who fly” around the turn of the twentieth century while capturing the different cultural meanings, and thus discourses associated with the female body in flight. Not only is Bieke interested in female trapeze flyers in vaudeville and circus, she is also intrigued by the various female aviators who performed aerial stunts and set records in modernity. Bieke’s paper focuses on African American aviator Bessie Coleman whose accomplishments are unprecedented, but, whose history, for various reasons, has not received the attention it deserves from scholars and aviation enthusiasts. 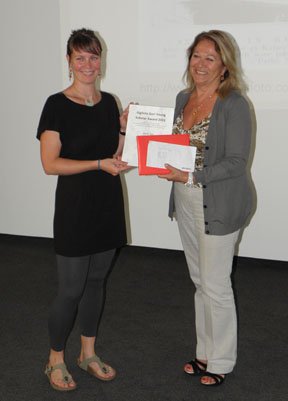 1st Conference on the History of Women and Sport from Past to Future, held in Dohar, Qatar January 22-24, 2012
This website uses cookies to improve your experience. We'll assume you're ok with this, but you can opt-out if you wish. Accept
Privacy & Cookies Policy