Dr. Matti Goksøyr is the winner of the ISHPES Scholar award for 2018. Dr Goksøyr is Professor of History at the Norwegian School of Sport Sciences in Oslo, Norway where he has worked for several decades. From 2006 – 2010 he was the Head of Department of Cultural and Social Studies at that university. He gained his doctoral degree from the Norwegian School of Sorts Science at the University of Oslo in 1991 and since that time has published numerous books and articles in both English and Norwegian.

Much of his extensive work has focused upon sport and physical culture in Norway providing a vivid window for international students into the political, cultural and ecological aspects of Norwegian sport history that has become highly thought of. For example he has written about the Winter Games in Norway and the creation of a Norwegian national identity; Norway and the World cup in soccer; cultural diffusion and sportification; and Norwegian sportsmanship and national celebrations. He has been a visiting scholar to countries around the world, especially to the University of California, Berkeley in the United States and the University of New South Wales in Australia. As well he has presented numerous talks to universities in the United Kingdom, Scandinavia, and elsewhere, as well as giving countless presentations at conferences around the world. His extensive contributions to sport history are to be celebrated.

Dr. Goksøyr’s keynote address at the 2018 ISHPES Congress was titled “Play vs. Fire: The Role of Sport as the Heat Increases. Sports Meet the Real World before and during World War II”. 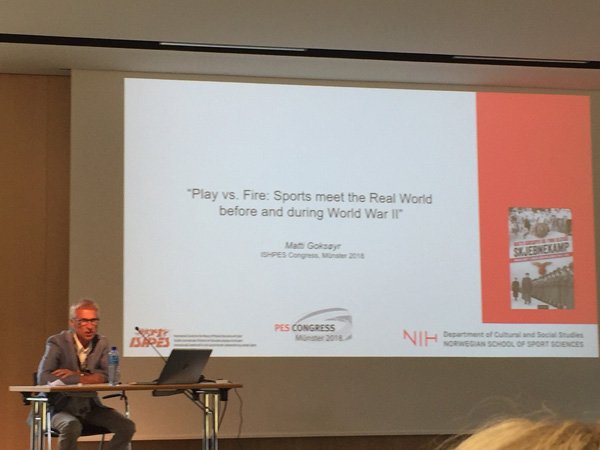 What is the importance of sport? What kind of roles can sport play? Such basic questions can be studied in various ways. One way to is to approach them from a historical perspective and for example ask what happens to sport as presumably more important things start developing.

This paper will study and discuss what happens to sport as its societal context changes from peace and so-called normality towards a borderland between political tension and war and eventually to real war. From an international perspective, it will discuss the roles sport took upon itself as the Second World War emerged and eventually folded out. With a particular emphasis on North-Western Europe and the German- occupied Scandinavian countries, the paper will depict and discuss how sports in the occupied nations portrayed themselves through different ways of re-acting and acting.

Sport in those nations found itself in a basic dilemma: What can sport‘s main contribution to society be when the country is under fire and eventually under ‚enemy‘ rule? Was it to give people some entertainment and diversion in an otherwise grim and grey everyday? Or was it to turn sport into a vehicle for resistance and thereby make it a political weapon?

European history offers different examples of how sport adjusted to these situations, depending upon and influenced by their countries‘ position and role in the war. The paper is based upon recent research with primary and secondary sources, as well as international research literature.