A landmark was created in history when the Qatar Museum of Olympic Sports in cooperation with the Qatar Women’s Sport Committee and the Qatar Olympic Committee organized the first Conference to be held in Qatar on ‘The History of Women and Sport’ at the Museum of Islamic Art in January 2012. It was opened by HH Sheikha Jawahir bint Hamad bin Suhaim Al Thani, the wife of HH the Heir Apparent.

The Conference was organized over three days focusing on the Past, Present and Future. The structure of the Conference spanned four topics – Physical Education, Sport for All, Elite level Sport and Women’s Leadership. The first two days involved presentations and discussions and the final days saw open discussions between leading women of the GCC and the audience, primarily from Qatar, on the future of sport for women in the Gulf Council Countries.

This was an inspiring and ground-breaking conference that facilitated international dialogue while focusing on Qatar and the GCC’s provision for girls and women in the field of sport related activities. There was a focus on sport provision at three levels: elite, community ‘sport for all’, and in education. There was an emphasis on strategies to raise aspirations and opportunities for of Qatari girls and women to engage in physical activity, including international sporting competition at the highest level. This was woven into a broader framework of ‘Women in Sport – Past, Present and Future’. Issues of equality, and the challenges faced by girls and women in the sporting field in the region and beyond were recognized and addressed in open, valuable exchanges during discussions and networking opportunities.

The influence of the Royal families across the GCC is paramount to success of the people in the region. The presence of members of the Qatari Al Thani Royal family at the opening and closing events, and for a full presentation and discussion session on the second day, added to the historical and future significance of the women and sport movement in the region and globally. HE Sheikha Al Mayassa Bint Hamad Bin Khalifa Al Thani gave her support on the opening and closing days. She is an inspiration in many sectors of Qatari society including to aspiring women athletes. She is making a major contribution in the process of change for greater inclusion of Qatari women in the sports arena.

On the second day a presentation and discussion by HE Sheikh Saud Abdulrahman Al Thani, General Secretary of the Qatar Olympic Committee, presented Qatar’s mission and vision. The event added an extraordinary contribution that espoused rapid change for Qatari women in the sporting field, commitment to physical education in schools and provision of ‘sport for all’ in Qatari communities. He answered many questions from the audience including on challenging areas such as dress code for women in sport. He is keen to support breaking down barriers.

Several issues permeated the conference including tensions between globalization and the dominance of western rooted sport models, epitomized by the Olympic Games, and retention of those aspects of cultural distinctiveness that make the region and each country unique.

The rapid changes regarding the role of women in society and efforts to improve the situation in sport related provision and participation for girls and women across the region were recognized. The challenges were discussed frankly and openly, the need to learn from the past and move to the future in a measured and respectful way that embraces the cultural traditions of women in the region and the process of change happening at different rates across the region.

Key challenges discussed:
–No historical culture of sport for girls and women on which to build so now need to see a better profiling of sport / physical activity as a means to develop society and enhance the lives of all people;
–Living through a rapid process of modernization, advancement has to be at an acceptable pace to the people with recognition of the constant process of change;
–Attitudes towards gender relations, eg the employment of male coaches to work with talented girls and women, is changing; views on the dress code were diverse but respect for covering the body was still essential for many women in the region to realize their potential in sport;
–The need for men and women to ‘pull together’ for improving the participation of girls and women in physical activity;
–The role of the Olympic Committee in development of sport for girls and women across the region;
–The role of the media and the urgent need to broaden its football and male dominated sport coverage in order to better promote women’s sport and local success;
–Relationship of rhetoric to reality – eg curriculum and strategy were only one side of the jigsaw, implementation was seen as the greatest challenge. The best of histories in physical education, coach education and development of sports leaders etc needs to be continued and improved, many specialists are required for the infrastructure of supporting development of sport for girls and women in the region.
–Focusing on the family and aspiring to families playing together in mutual support is one strategy for success.

A number of recommendations emerged from the event and discussions. My interpretation of these from the ‘Sheikha’s and later discussions recalls the following recommendations:
1. Increase the profile of upcoming events being organized for women’s teams from the region. The leaders saw this as key to the development and visibility of sport for women. For example the inaugural Arab women’s sports tournament with teams from 22 Arab countries is taking place in the UAE in February this year and Bahrain is hosting the 3rd GCC Women’s Sports Championships in Bahrain in March.
2. Support Qatar is an ’emerging’ country in the Women and Sport world from the International Olympic Committee and other bodies.
3. Improve the use of media in promoting the emerging sports culture for girls and women and support strategies at every level.
4. Incorporate school based physical education and sport provision for all, especially girls and children with disabilities, as a vital and valued contributor to the education of all children and a foundation for sporting interest, positive attitudes and talent identification. Address issues of quality provision such as teacher training and ongoing professional development, particular for women, across the region.
5. Consider a GCC subject association for physical education to allow greater cross region support, exchange of developments and solidarity in improving the opportunities for all young people through the education curriculum.
6. Connect school sport and elite sport through the development of middle level competition leagues for schools and communities. This would provide a stronger path for ongoing training and development for all, including potential international sporting athletes.
7. Realise the dream – for Qatari women to compete in the 2020 Olympic Games to be held in Qatar!
8. Be imaginative about the use of the environment for physical activity eg spaces for walking and suitable facilities for other activities for all women, playgrounds for children.
9. Start from what girls and women want to do, where and how and build from there for ‘sport for all’ engagement, eg utilizing traditional games and dances where they are part of the culture that is valued.

Much of the leadership of women’s sport in the region is through the Women and Sport Committees which are all aligned to the National Olympic Committees. Women remain severely underrepresented on the NOCs themselves, though the message about the importance of NOCs supporting women is permeating and countries know they have to do this if they are to be successful in bidding for major events. Nevertheless the existence of women’s committees in this relationship with NOCs has disadvantages as well as advantages.

The conference of 200 delegates was the first to attract men in substantial numbers as well as women and the first to see such strong participation of delegates in discussion and debate. It was a privilege to be there, the friendship and hospitality were greatly appreciated and I hope all will continue to move forward for Women and Sport in the region.

Tansin Benn
President, International Association of Physical Education and Sport for Girls and Women (www.iapesgw.org)
For one of many web reports see: http://www.qatarisbooming.com/2012/01/25/end-of-%E2%80%9Cthe-history-of-women-and-sport-from-past-to-future%E2%80%9D-conference/ 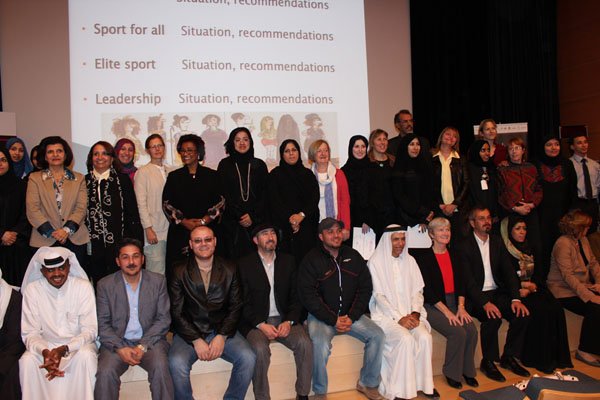